Somewhere in Siberia Christian families are learning about how to homeschool their kids!

QUESTION: Can you find the names of four Soviet submarines, when they were built, and how fast they went?

We’ve compiled all our video footage from our time in Vladivostok, in the far east of Russia! Check it out, and please pray for these pastors and their churches as they attempt to serve and obey the Lord in all areas of life.  We are VERY optimistic for the future of this country . . . IF they don’t forget to disciple the next generation.  This is why WE came, and I think they were listening!  May His will be done in this colossal nation!

Asher has some trivia questions for those of you interested in looking up some Soviet navy history.  Watch the video below and email us at davidson@frontier.net with your answers!!

Some of you have been wondering how Andie and I have been able to communicate with our brothers and sisters here in Russia. . .

God has given us a fantastic translator in Pastor Oleg Volkov. Without him our ministry in Vladivostok last week would have been nearly impossible.  His English was fantastic and the more he translated for us, the more we really clicked as a team.  Click on the video above to see a little “thank you” video we made for Oleg. . .

Click on the video below hear our latest trivia question.

REMEMBER THERE ARE PRIZES  FOR THOSE WHO ANSWER CORRECTLY FIRST!!!

Wow… Since we arrived here in the far east of Russia we have hit the ground running. It was quite a bit easier flying without all our little ones in tow but it is still exhausting to fly over seven time zones! The evening we arrived at Pastor Yuri’s home we had a gathering with five families from his church that were interested in the concepts of family discipleship and home education. We all sat around a table and enjoyed sweet Russian desserts and a very edifying conversation. It was the most lively interaction we have had with Russians so far as they shared their honest thoughts and reactions to the ideas of parents being responsible for the education of their children and not the government. Here are a couple pics from that evening…

And here are our sweet hosts, Yuri and Sveta with Baby Owen… 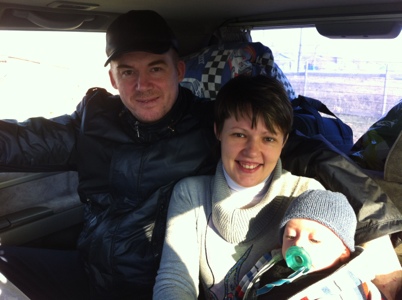 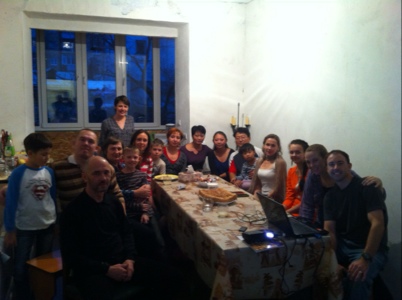 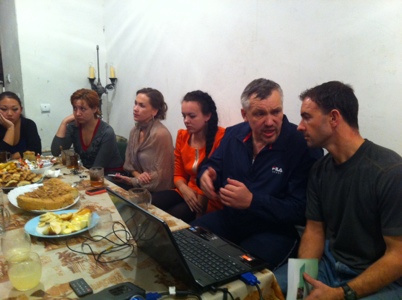 The next day we headed to a nearby town to share with Pastor Timothy (a Korean missionary) and his Church. After that gathering we drove about an hour to Pastor Edwards church to sleep for the night. We arrived at midnight and were welcomed with a Russian feast fit for a king! Here is a pic of that church 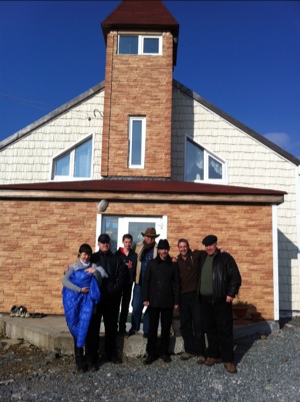 Since this picture we have spoken at two more churches in the last 24 hours.  We are totally exasusted but trying to make the most of our short time here in far east Russia.  The pastors are so happy to have us here to share as they very rarely have people come to minister due to the remote location.  I have more pictures and stories to share but we have limited internet and it is costly so I will post them in a few days when we return to St. Petersburg!

A ministry trip to the far east of Russia

Scott, Andie, Asher, and Owen, along with our translator, Pastor Oleg Volkov of St. Petersburg, are ministering for one week in Vladivostok, Russia.  Please pray for this time, that we are able to effectively encourage families to take the reins of discipleship in their families.

I thought you would like to see what a typical Lord’s Day looks like for us here in St. Petersburg. Even though we wake up rather late because we don’t have to leave for church until 10:30, it is still quite dark when we get up. The days are quite short this time of the year. This morning Tali treated us all to a yummy breakfast of homemade donuts! But as you can see in the second picture, Baby Owen didn’t enjoy them as much as we did… 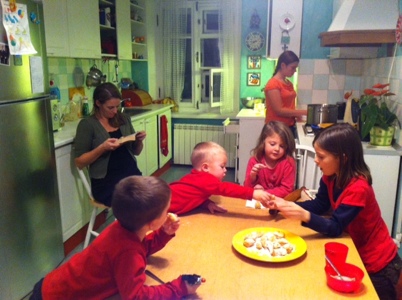 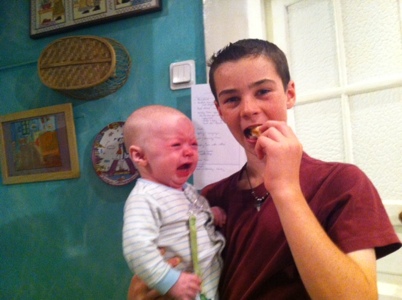 After breakfast we all bundle up (which is such a process that it could be a post in itself!) for the 20 minute walk to church. Here are some pictures from this morning’s walk. In them you will see our Nannies as well as the other two young ladies who live with us at the Purcell home. 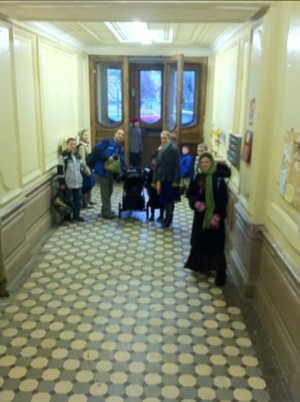 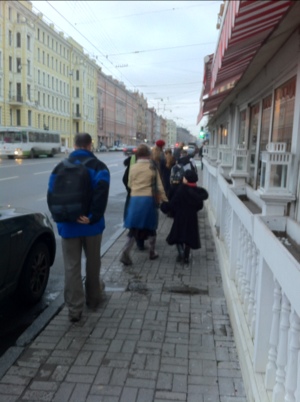 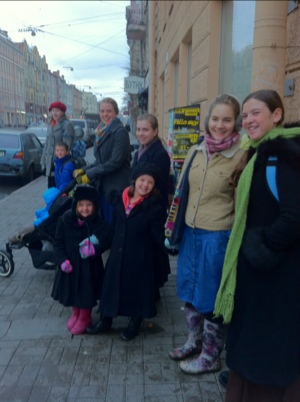 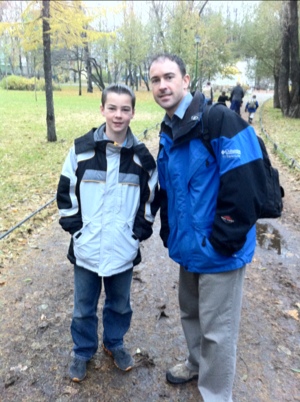 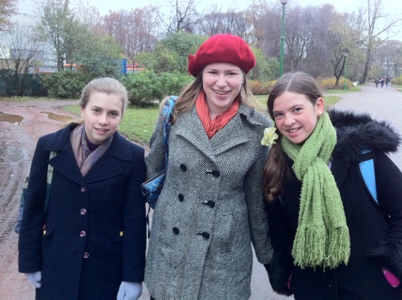 The church here meets in the seminary apartment. This morning Scott taught about family worship. In our family we have tried to be faithful to not only feeding our children physical food every day but also to feed them the Bread of Life which is God’s Word. We have found that teaching families this basic habit of reading Scripture every day (family worship) is very necessary. We were very encouraged as the man who translated for Scott was from another church here in St Petersburg was so eager to hear about family discipleship and home education so he invited us to come speak at his church when we return from our next trip. Our schedule for the next three weeks is filling quickly but we are excited to try to fit that meeting in. Here is a pic of Scott teaching. 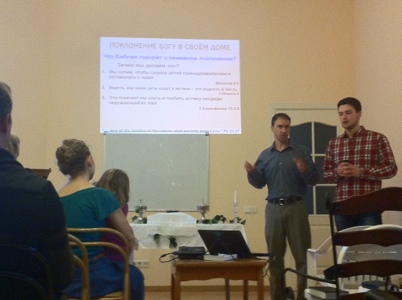 We hope you all enjoyed your Lord’s Day as much as we did!

Ps- I guess if you are reading this post right away on Saturday evening it might seem strange, but remember we are 11 hours ahead of Colorado time!

A few days ago we had a wonderful gathering of about 20 ladies on the topic of home management. I shared on what Titus 2 teaches regarding women being keepers at home. I used the analogy of the vital importance of a gate keeper to a valuable castle. If an enemy wanted to destroy the castle, he would first have to remove the gate keepers to gain entrance. In many ways that is what had happened here in Russia. Communism wanted to destroy the families so they intentionally removed the gate keepers of the home by taking over the education and discipleship of the children and forcing the mothers to enter the work force. The effects have been disastrous to the whole society. Encouraging women to gain a vision for the high calling of home management is absolutely necessary to rebuild the family. Please pray for these precious ladies!! 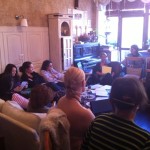 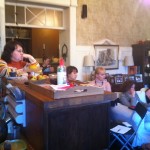 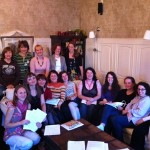 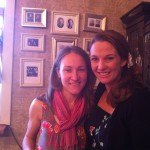 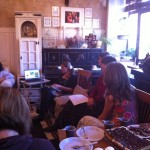 Receive our enewsletter of upcoming events and mission trips.

Our mission is to fulfill the Great Commission by promoting Christian Home Education. It is our goal to teach the nations to obey all that God has commanded them in regard to the God-given parental responsibilities towards their own children. Read More